This article was medically reviewed by Dr. Ira Gurland.

Meningitis is a complex disease that can take many forms, some being very serious or even deadly. As a result, it’s important to recognize the symptoms of different meningitis types and to understand how they are diagnosed and treated — as Dr. Ira Gurland of ID Care explains in this blog.

Meningitis is an inflammation, or swelling, of the meninges, the protective membranes that line the brain and spinal cord. It is most commonly caused by an infection of the fluid around the meninges.

Some quick facts about meningitis fall into the following categories:

“The best overall advice I can offer is to prevent meningitis when possible, urgently seek a diagnosis if you have symptoms, and, once diagnosed, follow the care plans given to you by infectious disease doctors like those at ID Care,” Dr. Gurland said.

Anyone can get meningitis, but certain groups of people are more at risk:

Recognizing the Symptoms of Meningitis 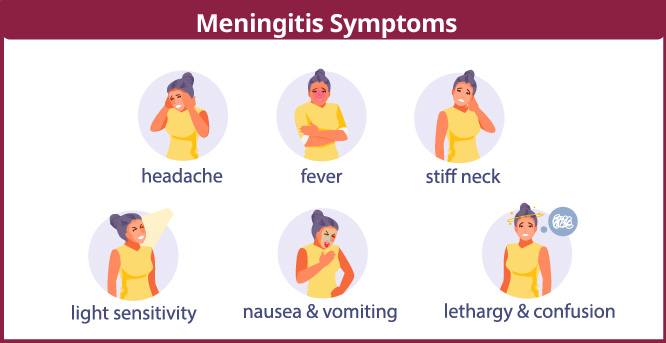 The symptoms of meningitis are similar across all types of the disease but may vary in severity. They can include:

The list may be broader for some disease types; for instance, bacterial meningitis symptoms may also include seizures and/or a rash.

Some types are preventable.

A key way to prevent meningitis is through vaccines, which can help prevent some bacterial forms of the disease. One vaccine prevents meningococcus by targeting four bacterial types. Another meningitis vaccine protects strictly against S. pneumoniae, while a third type protects against disease caused by Haemophilus influenzae type B. There are no other types of meningitis vaccination.

“It is fortunate that we have a vaccine against meningococcal meningitis, a rare but very contagious and devastating form of meningitis that can leave people with significant damage to their brains and bodies,” Dr. Gurland said. “Generally, this vaccine is given to younger people, who face a higher risk of contracting the disease. Most pediatricians give it to patients from age 11 to 16 in preparation for college, where there have been many outbreaks due to students living and gathering in small spaces and spreading bacteria through respiratory secretions. At ID Care, we offer these vaccines in our offices.”

There are also several other strategies for preventing meningitis:

The Best Way to Diagnose Meningitis

All forms of meningitis are diagnosed by sampling the fluid around the brain using a lumbar puncture, also known as a spinal tap, ideally in the emergency room.

“As soon as you suspect that you may have meningitis, it’s time to go the emergency room,” Dr. Gurland emphasized. “This disease is often an emergency, and that certainly includes all of the bacterial forms, which require urgent diagnosis and treatment.”

A Look at Types of Meningitis

Meningitis is divided into types based on the kinds of germs that cause it.

The two most common in the United States are:

Together, the viral and bacterial forms comprise 99% of all the meningitis cases in the United States. The viral type alone causes more than half of those, with an incidence ranging from 0.26 to 17 cases per 100,000 people. The most common type of viral meningitis, caused by enterovirus infections, account for up to 75,000 cases each year in the U.S. Meanwhile, for every 100,000 people in the U.S., there are 1.3 cases of bacterial meningitis, which translates to about 4,200 cases per year, approximately 500 of them fatal.

Other types of meningitis are even more rare. They include:

All those types are considered infectious because they are caused by germs that can spread between people. There are also non-infectious types of meningitis:

Treatment is different for each type of meningitis.

Viral meningitis occurs when a virus causes an infection of the meninges. The most common causes are non-polio enteroviruses, including coxsackie virus A and B and echoviruses, which are inhaled or acquired through the gastrointestinal tract. In addition, the genital herpes virus HSV-2, often having been reactivated after an earlier infection, can cause meningitis. Viral meningitis runs its course in 1-2 weeks, with little risk of complications.

In rare cases, viral meningitis can occur frequently in specific individuals. This syndrome is known as Mollaret meningitis. “Although some research shows a connection between this syndrome and the presence of HSV-2, as infectious disease doctors, we don’t yet fully understand why these individuals so often experience viral meningitis symptoms,” Dr. Gurland said.

Viral meningitis is treated mainly with supportive care consisting of rest, pain medications and, when necessary, IV fluids. This is because not many antiviral medications work well against the common causes of this disease type.

Bacterial meningitis occurs due to an infection by bacteria that are inhaled and then travel through the bloodstream and into the meninges; others are acquired from food. Once severe symptoms have emerged, bacterial meningitis is likely to last at least 10 to 14 days with treatment with antibiotics.

This type of meningitis can be quite severe and quickly deadly. In some survivors, it can cause long-term health issues. Brain problems, such as infections, can arise, causing speech and sight difficulties that could become permanent. “Some are surprised to learn that pneumococcal meningitis can also be associated with difficulty hearing that can linger after the illness is over,” Dr. Gurland said. “However, if the cause is recognized and treatments such as steroids are given, the severity of the hearing loss may be reduced.”

Your Environment and Fungal Meningitis

Fungal meningitis is extremely rare in the United States. Here are 3 top facts about this type of meningitis:

Parasitic, or eosinophilic, meningitis arises when a parasite contracted from eating contaminated food inflames the meninges. “This type of meningitis is very unusual in the United States and more often occurs in Southeast Asia when people contract Angiostrongyliasis cantonensis from eating raw snails,” Dr. Gurland said.

An especially rare and usually fatal type of parasitic meningitis called amebic meningitis is typically caused by the pathogen Naegleria fowleri. Three top facts about this type of meningitis are that:

“Less than 350 cases of amebic meningitis, also known as amebic encephalitis, have been reported worldwide, but it’s worthwhile to note that there has been a higher incidence of this kind of infection in people who irrigate their noses using neti pots,” Dr. Gurland said. “The recommendation with nasal irrigation is to use filtered or sterilized water, because if you use tap water or water that is stagnant, it’s possible for free-floating amoeba to enter the nose and burrow into the nasal cavity to the brain.”

Do You Need to be Hospitalized for Meningitis?

“If a spinal tap suggests viral meningitis and the patient can eat and function with pain medications, he or she can go home for rest and hydration. But patients who can’t control their pain and can’t keep food down should go to the hospital for supportive treatment, even if their meningitis is viral,” Dr. Gurland said.

When a spinal tap suggests bacterial meningitis, the patient must be hospitalized to receive antibiotics and await a definitive diagnosis, which can take a few days. Infectious disease doctors like those at ID Care send these patients home once their condition has stabilized and a treatment plan has been put in place. Other types of meningitis usually require hospitalization, too.

What is ID CARE’s Role in Treating Patients with Meningitis?

The infectious disease doctors at ID Care play a central role in the management of meningitis across New Jersey.

“Our first goal is to prevent meningitis, so we strongly encourage and provide vaccination,” Dr. Gurland said. “We can also make recommendations about how to test for meningitis and how to diagnose meningitis. Finally, when patients do receive a diagnosis, ID Care doctors have the expertise to provide effective therapies rapidly, which is crucial in the management of what can be a devastating and even deadly disease. Our team of more than 50 doctors is available to provide that care 24/7.”

To schedule an appointment with an ID Care infectious disease doctor today, call 908-281-0221 or visit idcare.com.