Things to Know About Preventing HIV with PrEP

This article was medically reviewed by Dr. Andrew Lee.

We’re now in the fifth decade of life with the human immunodeficiency virus (HIV), and the nature of both treatment and prevention has changed profoundly over that time. The advent of effective pre-exposure prophylaxis (PrEP) medicine has revolutionized the approach to prevention, and the challenge now is to raise awareness about it. If you or someone you love is at risk for HIV, there are certain things you need to know about preventing HIV with PrEP.

When HIV first emerged in the 1980s, getting infected was tantamount to a death sentence. Little was known about this novel, deadly virus except its vexing ability to evade our attempts to understand, treat, and cure it. In the decades since then, medical science has transformed HIV from a debilitating, fatal disease to a chronic condition that most patients can manage well with a highly effective antiretroviral therapy (ART) which includes a combination of HIV medicines called a treatment regimen. Today, daily single-pill regimens are available that combine HIV drugs for convenience and simplicity.

The great news that more people need to hear is that many advances in medicine have rendered HIV infection largely preventable with the use of PrEP, prescription medications that impede HIV transmission with a combination of antiretroviral drugs. These are commonly offered in a daily pill form, but recently an injection has become available that is administered every other month. 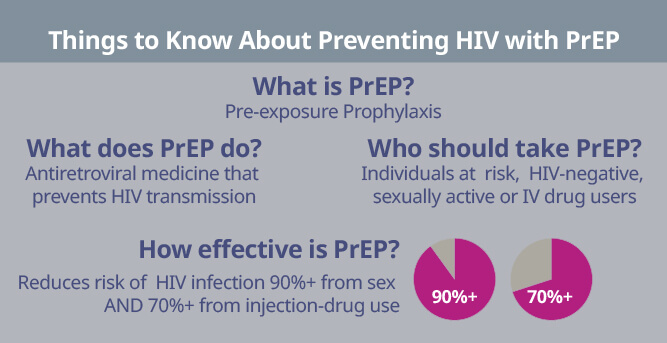 PrEP is for people who are currently HIV-negative but at high risk for getting infected with HIV, including those who:

While clearly successful in limiting the spread of HIV infection, PrEP is still relatively new, and even high-risk populations are not yet fully aware of its benefits. In this blog, ID Care’s Dr. Andrew Lee explains the things to know about preventing HIV with PrEP, and how simple, safe, and effective it can be. PrEP awareness can save lives and valuable healthcare resources, so learn the things you need to know about preventing HIV with PrEP, then help spread the word.

According to Dr. Lee, “PrEP is short for pre-exposure prophylaxis, which means stopping the infection before it happens, to prevent the disease. We do this today with a combination of antiretroviral drugs for people who do not have HIV, to be taken before possible exposure to HIV to reduce the risk of acquiring the infection.”

In 1996 after much research and development, a combination treatment known as highly active antiretroviral therapy (HAART) became the standard of care for people with active HIV infections. This treatment approach greatly increased the life spans of people with HIV/AIDS, and led to the development of PrEP, or therapies to prevent HIV infection.

The first oral PrEP medicine, Truvada, was approved by the FDA in 2012. It was followed by Descovy in 2019, and the injectable Apretude in 2021. Most patients on PrEP take either Truvada or Descovy, both in pill form.

How PrEP Works: A Fortified Wall

PrEP works by creating a fortified wall around the body’s CD4 cells, also known as T lymphocytes, which are white blood cells that fight infection. This antiretroviral barrier impedes the HIV retrovirus from crossing into the CD4 cells and replicating, preventing HIV infection most of the time.

Dr. Lee is emphatic about PrEP’s value in preventing HIV: “PrEP is very effective. Studies have shown it can reduce the risk of HIV infection by over 90%, and this is a very significant improvement.”

It’s a fairly forgiving treatment regimen, so missing a dose of oral PrEP is not a big deal, according to Dr. Lee: “Missing one dose occasionally is not a concern, but if you start missing doses multiple times a week, you could have reduced efficacy and possibly the development of some antiretroviral resistance, which is not good.”

How Long Before PrEP Becomes Effective?

The amount of time it takes before PrEP becomes effective varies based on where the likely infection point is located. Generally, it takes longer to become effective in vaginal tissue then in rectal tissue.

He added that “I recommend my new patients use condoms until the PrEP medications take effect and continue using them if their lifestyles include any risk of other STD infections. Condoms can prevent a variety of health problems.”

Does PrEP Prevent or Treat HIV?

PrEP prevents HIV, it does not treat active cases.

However, Dr. Lee added that “while the PrEP formulation is for HIV prevention only, it does include some medications we use for HIV treatment. But PrEP is for HIV-negative people only.”

Can You Get HIV on PrEP?

You can contract HIV while on PrEP, but it is very rare. People in high-risk groups have far more risk of HIV infection without PrEP than with it, and it is always better to prevent an infection than treat one after it happens. Dr. Lee recommends that everyone at risk for HIV get evaluated to see if PrEP is right for them.

Does PrEP Prevent Other STDs?

HIV PrEP can prevent HIV in uninfected people. It cannot prevent any other disease, so people taking PrEP should follow all standard infection control protocols and safer sex practices, especially condom use.

Dr. Lee spends extra time with some patients to get this point across: “Whenever patients ask about PrEP or are already taking it, we always talk about safer sex first, because some patients want to believe they’ll be invincible on PrEP, and they wind up getting syphilis, gonorrhea, or something else we need to treat in a subsequent visit. People on PrEP should continue using all the standard safer sex practices appropriate for the lifestyles they are living.”

Who Should Take PrEP?

PrEP is for those who do not have HIV but are at high risk of contracting it. The virus is typically transmitted through direct contact with certain bodily fluids of an HIV infected person that then get into the bloodstream of a HIV-negative person through a mucous membrane, open wound, or needle injection. So, the people most at risk include those who:

“These are the people who really should be taking PrEP,” advises Dr. Lee, “because their lifestyles put them at increased risk of exposure.”

What are the Ways to Take PrEP?

Initially, PrEP was offered only in pill form, but in 2021, injectable Apretude became available. It requires an intramuscular injection every other month, and is particularly useful for patients who have trouble taking pills or remembering to take them.

Most people take PrEP on a daily oral dosing schedule, but some follow the PrEP 2-1-1 scheme, approved for Truvada only. PrEP 2-1-1 involves taking fewer pills during periods of less frequent sex, and has been shown to be similarly effective to daily oral dosing. Of course, this requires guidance from a physician to ensure appropriate usage and compliance for maximum effectiveness.

Truvada is the oldest medication in use for PrEP as it was FDA approved for HIV prevention in 2012. Descovy is a similar formulation approved in 2019, but often with fewer side effects than Truvada.

For patients who are males who have sex with males, daily Descovy is typically recommended. For females, Truvada is the drug of choice, because clinical data on Descovy in this group is currently lacking. For those with significant kidney function issues or osteoporosis, Dr. Lee recommends against taking Truvada at this time.

Bimonthly, injectable Apretude is the latest PrEP medication, and Dr. Lee reports that “it is a well-tolerated medicine, and the data look great for HIV prevention. It’s probably best for patients who are medication-averse or forgetful and have trouble complying with daily use pills.”

PrEP Side Effects, Concerns, and Interactions

Common PrEP side-effects are usually mild and temporary, but the ones patients may encounter include:

“Fortunately, most of these symptoms go away with time,” said to Dr. Lee, “but there have been reports of long-term Truvada use being associated with kidney disfunction and bone loss, so these should be monitored.”

“With Apretude, however,” he added, “the main side effect that we encounter is injection site irritation and pain. Studies have shown that about 3% of Apretude patients had to stop taking it for that reason.”

PrEP is generally safe and well-tolerated, but problems may occur in a small percentage of users. The following symptoms can indicate potentially serious conditions related to taking PrEP. If you notice any of these, consult your doctor immediately:

PrEP Interactions with Other Medications

Generally, PrEP does not interact with other medications. Dr. Lee considers it exceptionally safe in this regard: “It’s actually an excellent drug with few interactions, but if somebody is taking Truvada long term, I do tell them not to take nonsteroidal anti-inflammatory drugs (NSAIDs) for an extended period due to potential kidneys problems.”

How Do You Get PrEP?

HIV PrEP is available by prescription only, so step one is to see a doctor, ideally an infectious disease specialist like those at ID Care. If your HIV test is negative and your examination and patient history support treatment with PrEP, your doctor will write a prescription to be filled at your pharmacy.

According to Dr. Lee, “we do an STD workup as a baseline, and then see the patient every three months thereafter to check for normal kidney function, HIV-negative status, or the presence of other STDs. Truvada and Descovy are well-known medications, so it is usually a simple process with quick approval. However, Apretude is a newer medication, so before we suggest it, we make sure the patient’s insurance will cover the cost.”

Those without health insurance or who need financial assistance can apply for free HIV PrEP through a nationwide program available at https://readysetprep.hiv.gov.

What is ID Care’s Role in Treating Patients with HIV PrEP?

As infectious disease doctors, ID Care treats a significant number of patients taking PrEP, but Dr. Lee believes many more people should be taking it, so raising awareness is a priority.

“More education and outreach are needed for high-risk people who may not be aware of this medication,” Dr. Lee said, adding that “some people hesitate to start an antiretroviral treatment because they’re unfamiliar with it. This is exactly where ID Care doctors can be especially helpful, in educating each patient as well as the broader community about the effective treatment options that are available right now.”

ID Care doctors have been on the forefront of HIV research, education, and treatment and are committed to leading the charge on prevention. PrEP is an essential defensive shield in this battle. Simply put, HIV PrEP can save your life if you are at high risk for HIV exposure.

In Dr. Lee’s assessment, “HIV is still out there, and new patients are an unfortunate fact of life. For people who could be at high risk for this disease, it’s important they know about this preventative treatment option so they can take the initiative and start using it. To find out if PrEP is right for you, ask your primary care physician or come see us at ID Care.”

At ID Care, your health is our priority. If you have questions about PrEP to prevent HIV and if it is right for you, please call us at 908-281-0221 to schedule an appointment or visit idcare.com.